This post may contain affiliate links which means I make a commission if you shop through my links. Disclosure Policy

I made these Spiderweb Halloween cupcakes this year, and got so many compliments that I just had to share.

The thing is, these cupcakes were so easy to make, that I can hardly call it a recipe at all.

You Martha Stewart types out there will scoff at the shortcuts I took.

But for me the shortest distance from raw materials to finished product is what works.

If it is too time consuming, it just won’t happen.

How to Make Spiderweb Halloween Cupcakes

This is how it's done.

I use a boxed cake mix to make the cupcakes.

I have it used for years and am constantly amazed at how many compliments I get. After all – it’s a mix.

The key is in the cooking time.

If you overcook cupcakes they get dry.

So, follow the directions on the box, set a timer, and know your oven.

2. Mix Up The Frosting

While the cupcakes are cooling, mix some orange food coloring into a tub of ready made white frosting.

I used Duncan Hines Whipped Fluffy White – but any kind will do.

Keep this in mind – if you are using liquid food coloring (probably a mix of red and yellow) then the food coloring itself will change the consistency of the frosting – making it a little less thick.

The DH Fluffy White may become too thin to use, so a thicker frosting would be better.

I used Wilton paste food coloring in orange – so it did not dilute the frosting too much.

3. Spread Each Cupcake With Orange Frosting

Spread a thick layer of orange colored frosting on each cooled cupcake.

4. Draw a Spiral With Black Frosting Over the Orange Frosting

Now take your can of black decorator’s frosting and create a spiral design on top of the orange frosted cupcakes.

It come in a pressurized can similar to whip cream.

Outfit the can with the small smooth round tip.

Now draw a spiral on each cupcake with the black frosting.

Take a toothpick and starting at the center of each spiral drag the toothpick through the frosting straight to the outer edge. (like spokes on a wheel).

Repeat this at regular intervals around the cupcake until you arrive back to the beginning.

There you have it.

Add Some Spiders to your Halloween Cupcakes

You can make these Halloween cupcakes extra creepy, crawly by adding a spider to each cupcake:

These Spiderweb Halloween Cupcakes are an Easy Dessert Treat

Obviously, kids get a lot of sugary treats at this time of year.

I like that these cupcakes are a simple, easy Halloween treat that are not too over the top.

What are some of your favorite baked Halloween treats? 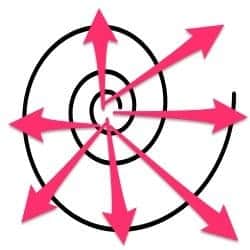 Previous
How To Use Evernote Effectively: Step 2 Collecting Notes

Next
How To Shred Brussels Sprouts
Click here to cancel reply.